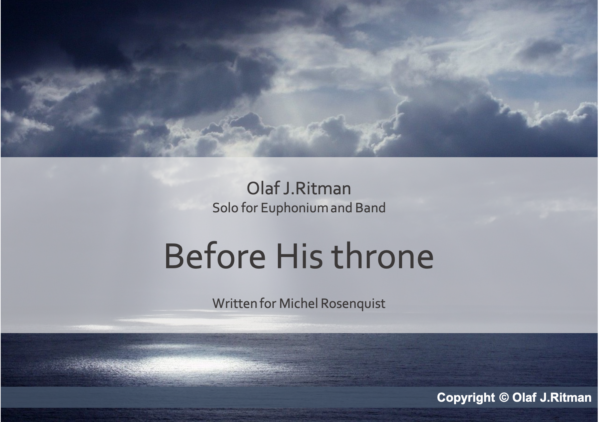 Before His throne
Euphonium Solo

For me, the words of the song, Before the throne of God above (Magnify 9), reach to the heart of Christianity; namely the fact that because Jesus died on the cross, rose from the dead and now lives before God’s throne in Heaven, my soul is counted free. As Christians, we believe that we are all his children.

Originally conceived as a duet, it took a number of years for this solo to come to fruition. The solo starts quietly and builds up gradually. Make sure that the first climax doesn’t happen until letter D. This is the first place where the full band is playing and it needs a rich, warm forte sound. The rubato in F lasts until the Tempo primo at bar 75. Give plenty of space to the soloist and the band; don’t rush anything and take your time. From the Tempo prima we need to build into letter G, where the band can again give a warm, full sound. At G itself, don’t let the intensity suffer from being an accompaniment; it’s not really about the soloist here, as they are only playing an obligato part which will be heard anyway. Ensuring an effective gradual morendo from letter I is not easy. Give enough space to the musical lines and let a warm, but quiet, final chord hang in the air for a moment.

This solo was written for my friend Michel Rosenquist at his request and is based on Bob Kauflin’s beautiful song “Before the throne of God above”. Michel is the principal Euphonium player of the Amsterdam Staff Band as well as the Bandmaster of the Rotterdam-Oost band of the Salvation Army in The Netherlands.

The lyrics of the song say:

Before the throne of God above
I have a strong and perfect plea
A great High Priest, whose name is Love
Who ever lives and pleads for me