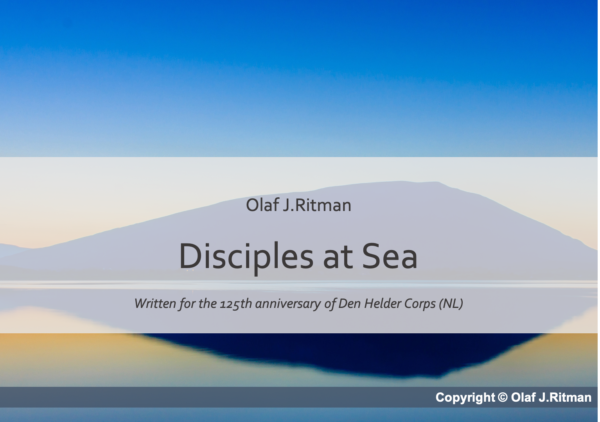 “Disicples at Sea” was commissioned by Den Helder Corps (The Netherlands) to celebrate their 125th anniversary in October of that year. The city of Den Helder hosts the marine base of The Netherlands and is quiet famous for that. Therefor the songs that are used are all linked to “the sea”.

After a somewhat majestic introduction and a small reference to “Ship ahoy!” (5 bars before A) the first song that can be heard is “A little ship” (transformed into a 7/8 time to reflect the rough sea). This children song tells the story of the disciples sailing at sea when suddenly a storm comes up. Since they were frightened they asked Jesus what to do but then he calms the storm be simply saying: “Peace, be still!”. The song ends with the encouraging verse: “O, well we know it was the Lord, our Saviour and our Friend, whose care of those who trust His word will never, never end.”

In D, like the storm, the music suddenly comes to a stand-still and one could imagine hearing the sea and storm calming down with musical effects in percussion and ‘wind blowing’ through the brass instruments! Then, in E, the storm has died down and only some rippling water is left. Throughout the whole piece, but especially throughout D and E, a falling third motive can be heard (the first bar of the next song “If you would be my disciple”) that symbolizes the call of the disciples: “Fisherman!”. Sometimes penetrating, other times as a whisper…

The narration of Matthew 4:18-20 leads into the next song: “If you would be my disciple”. Published almost 40 years ago but still as beautiful as then this song is still in the Dutch songbook and remains very popular. It was requested to use this song in the piece. And it reminds us that we need to leave everything behind to follow Jesus: “Take up your cross and follow me!”

After a fairly straightforward setting of this song the sea is calming down again halfway through letter G although some very dissonant chords remind us that the sea can be grim!

In the last movement a reprise of “A little ship” can be heard again before the piece ends with a majestic setting of “If you would be my disciple”. Five bars before the end there is a last call of the disciples (in 1st/2nd cornet + flugel horn): FISHERMAN!

We are called by Jesus to follow him and be fishers of men!